US to accept thousands of Syrian refugees for resettlement

US Assistant Secretary of State for Population, Refugees, and Migration Anne Richard says the United States will dramatically increase the number of Syrian refugees allowed to resettle permanently in the United States from about 350 this year to close to 10,000 annually as the crisis grinds on into its fifth year.

Summary? Print The low number of Syrian refugees accepted so far by the United States, attributable in part to Germany and Sweden offering to "take a lot," will increase significantly in 2015, a US State Department official says.
Author Barbara Slavin Posted December 22, 2014

While the number is minuscule given a total Syrian refugee population of 3.3 million, it reflects US recognition that the civil war in Syria is not about to end anytime soon and that, even when it does, Syria will need years for reconstruction and reconciliation.

So this sounds like a hamburger commercial, but it's true. Using our new Custom Reporting tool, you can easily generate reports the way you want them by following the simple report wizard.

Step 2: Pick your data groups.(in production there will be more groups than this to choose from).

Step 3: Pick your columns in the order that you want them. You can also so actions like sum, count or average. 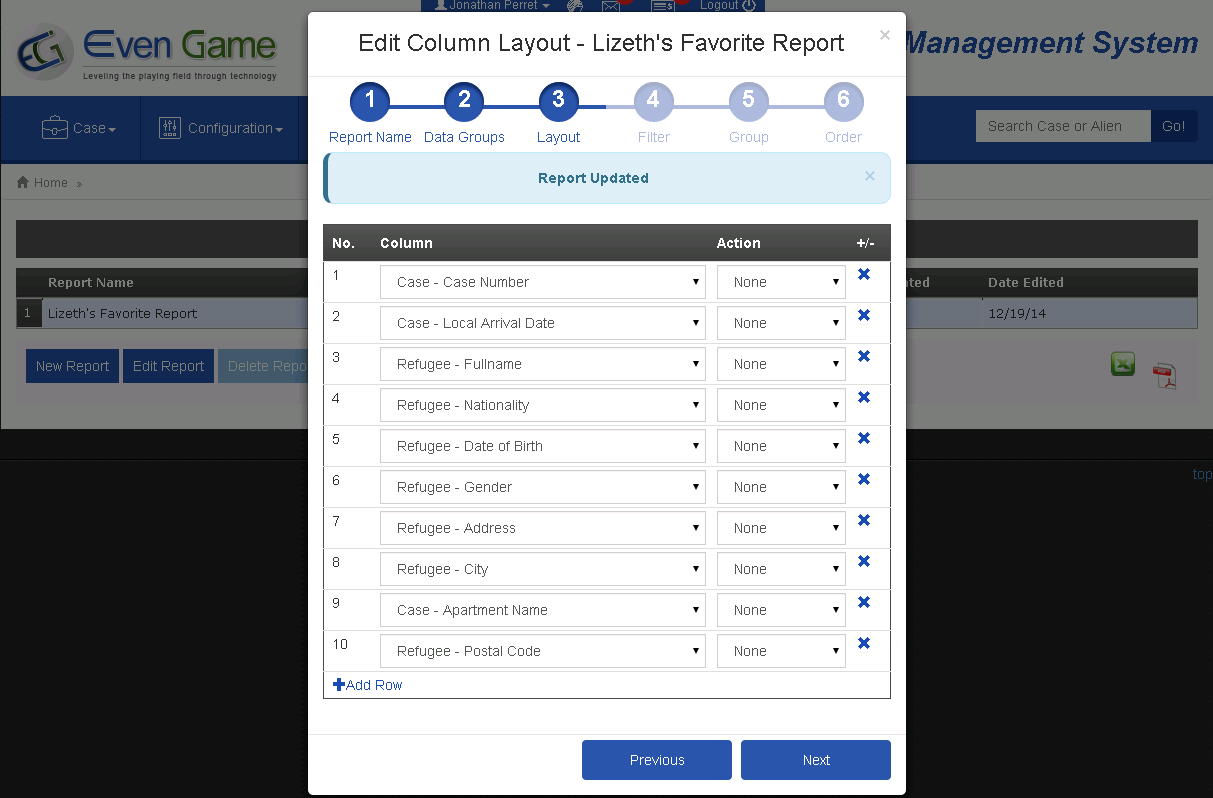 Step 4: Filter your data. In this version each filter is using an AND operator.

That's it. Now you have a report that you can run anytime you need it. You can easily edit it to update any values and run it as often as you would like. You can output your report to a PDF or to Excel.

For many communities, it might have been a proud but fairly routine assembly, with pupils coming forward to receive certificates and handshakes from grownups for school achievements, but the recent Education Day, which the Somali Bantu Community Association of Pittsburgh conducted, was a poignant event for people who were largely excluded from educational opportunities in their homeland for generations before being terrorized into exile.

Only in refugee camps in Africa and after resettling to America did they have more opportunities for schooling.

Refugee News
The federal government is preparing for another “surge” in refugees and this time they won’t be coming illegally from Central America.

The U.S. State Department announced this week that the first major contingent of Syrian refugees, 9,000 of them, have been hand-selected by the United Nations for resettlement into communities across the United States.

The announcement came Tuesday on the State Department’s website.

WND reported in September that Syrians would make up the next big wave of Muslim refugees coming to the U.S., as resettlement agencies were lobbying for the U.S. to accept at least 75,000 Syrian refugees over the next five years.

Until now, the U.S. had accepted only 300 of the more than 3.2 million refugees created by the Syrian civil war in which ISIS, El Nusra and other Sunni Muslim jihadist rebels are locked in a protracted battle with the Shiite regime of Bashar al-Assad.

But the U.S. government has been the most active of all nations in accepting Islamic refugees from other war-torn countries, such as Iraq, Somalia and the Democratic Republic of Congo.

The State Department announcement makes it clear that the 9,000 refugees represent just the beginning of an extended program to accept more Syrians.

Twenty-eight countries have agreed to take in more than 100,000 refugees from Syria, doubling the number of migrants to whom they were initially offering asylum, the United Nations refugee agency, UNHCR, has said.

Antonio Guterres, the head of the UN agency, said on Tuesday that he was pleased with the new pledges but that much more help was needed to curb the rampant displacement crisis in Syria.

"We estimate [there] will be more than 100,000 opportunities for resettlement and humanitarian admission," Guterres told reporters on Tuesday after a high-level pledging conference in Geneva.

He said 28 countries had expressed solidarity with Syrians who fled their war-ravaged country, and with neighbouring Lebanon, Jordan, Turkey, Iraq and Egypt, which are struggling to cope with a bulk of the refugees totalling in the millions.

The world has a debt of gratitude to the neighbouring countries that probably we will never be able to fully pay or to fully express," Guterres old delegates.

There was no clear overview over which countries had pledged what, but Guterres hailed the roles played by Germany, Sweden and the United States in the resettlement programme.

However, the total pledges to help refugees still fall short of a UNHCR's target and the numbers experts say are necessary.

Whether you are single, dual or tri agency affiliate RMS can meet your program needs. The software allows you to keep track of flex fund expenses easily and accurately with the ability to know how much flex funds are available at any given time to spend on most vulnerable refugees. Jonathan and Steve are very easy to work with and have a thorough understanding of the Refugee Resettlement Program. I strongly recommend this software to all resettlement agencies."

The Alliance’s customized Refugee Management System (RMS) Software is the result of ongoing collaboration among our directors, resettlement staff, and the software developers. Jonathan and Steve are very knowledgeable about refugee resettlement and this new software will help guarantee accurate, accessible data for documenting services and monitoring expenses. Managers can track and follow up on core services delivery in near real-time. Through RMS, the Alliance’s diverse range of refugee support programs (ESL, Drivers Education, Employment, Case Management, Asset Building, Vocational Training, etc.) will now be more fully integrated with our core Resettlement program.
The Refugee Solutions team takes a value-added approach that goes beyond basic data collection. We now have a wealth of quality data that can be accessed by program managers and the resource development team to enhance our agency’s strategic planning. Another important feature is the internal notifications, which help programs communicate quickly and seamlessly with each other. Jonathan and Steve have built a user-friendly database that lets us spend more time on delivering quality services to refugees. I am very happy with RMS’s strong performance and look forward to collaborating over the long-term on new features and updates."